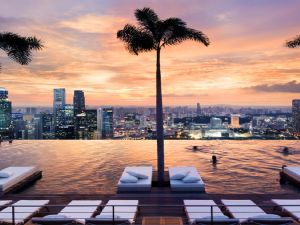 Though physically quite small, Singapore is an economic giant, and has been Southeast Asia's most modern city for over a century. The city blends Malay, Chinese, Arab, Indian and English cultures and religions. This unique ethnic "recipe" affords a wide array of cultural and culinary opportunities from which to choose.

Singapore offers delectable cuisine and great shopping! The country includes the island of Singapore and 58 or so smaller islands. Because of its efficient and determined government, Singapore has become a flourishing country that excels in trade and tourism and is a model to developing nations. The capital city, also called Singapore, covers about a third of the area of the main island.

Singapore's tropical climate welcomes both leisure and business travellers year round. The island republic's excellent infrastructure enables residents to enjoy everything it has to offer in a safe, clean and green environment. Award winning Changi Airport provides air links to practically every destination around the world. The train and subway systems are clean, fast and efficient.

In the city, there is no need for a car as public transportation is excellent, and walking is a good way to explore the city. Since the city is only 60 miles (100k) from the equator, the tropical temperatures do not vary much and rainfall is fairly evenly distributed through the year.

Singapore's progress over the past three decades has been remarkable, yet the island has not been overwhelmed by development. Modern skyscrapers mix comfortably with much older buildings.

Today Singapore boasts the world's second busiest port after Rotterdam, minimal unemployment, and a super-efficient infrastructure. Almost the entire population lives in upscale new apartments. Singapore is a clean, safe place to visit and live, its amenities are second to none and its public places are smoke-free and hygienic.

Singapore is both an island and a country, but perhaps its best description is that of city-state. Like the great city-states of the past, it offers civilization and order in the highest degree. Its combination of Western-style development and Eastern-style calm seems to present the best of both hemispheres: It's a modern metropolis where you feel safe walking the streets, and it's an Asian business centre that's a model of efficiency. Singapore is also a multicultural city, and close to one-quarter of its population are expatriates or foreign workers from all over the world. Known for its desire to become the technology hub of Asia, Singapore is the most wired country in the region.

Part of this drive to be the best has led Singapore to invest heavily in its healthcare infrastructure, and is now looking to increase its healthcare workforce to provide services to, and support this rapidly increasing industry.

The annual inflation rate in Singapore is among the lowest in the world. The government keeps a tight rein on the economy to good economic effect. The ECPI (Expatriates Consumer Prices Index) reflects the cost of living for expatriates living and working in Singapore. The difference between the CPI and the ECPI is due to the different consumption patterns of expatriate and local households, as well as the different weights given to the various items used to compute the indices. For example, while the CPI generally reflects the trend in food prices, the ECPI reflects the trend in housing rentals because the accommodation index alone accounts for 40% of the total weights. There is a publication by the Singapore International Chamber of Commerce (SICC), who publishes a comprehensive living cost for Expatriates living in Singapore. A copy of the publication is available on their website at www.sicc.com.sg. The information is updated yearly.

As a city state, Singapore is the second most densely populated country in the world. Making public transport easily accessible keeps the congestion in check and helps to protect the environment. This is seen as an on-going challenge for the Singapore government.

Singapore enjoys a varied range of public transport alternatives that provide services that covers the entire island at reasonable rates. They range from the public buses Mass Rapid Transit (MRT) system, Light Rail (LRT) system, buses and taxis. The public transport services are efficient and run at regular service intervals with passengers charged according to distance travelled. Being the major centre for commerce and trade in South East Asia (if not globally), Singapore is home to expats from all over the world – with large numbers of Aussies, Kiwis and Brits living on the island.

With English as one of the four official languages, as well as schools from all over the world, you can understand why more and more people are choosing to live in Singapore. ALL our clients are English speaking to so language most definitely won't be a barrier!